Crayfish of 8 flavors available in Jiande

It’s the food that appeases people’s heart most.

On June 7 evening, Jiande Yangxi Street held a grand "Yangxi Food Box" opening ceremony. At 5 pm, the outdoor temperature was quite high, but Chaoyang Road was already crowded. The prepared tables and chairs were quickly "occupied" by people. When the kitchen of every restaurant started to work, the tantalizing smell soon spread throughout the street. People put aside their phones, put on gloves, peel off the fat crayfish meat, put them into their mouths and enjoy the delicious food.

Yangxi Food Street is one of Jiande's most authentic holy land of food. In the activity, it has a beautiful new name--"Yangxi food box". Braised in oil, spicy, steamed, mashed garlic, spicy…The “Yangxi food box" lobster has eight flavors, while snails are divided into two kinds: sauce-fried and snails in soup. They are collectively referred to as "Yangxi ten wonders". 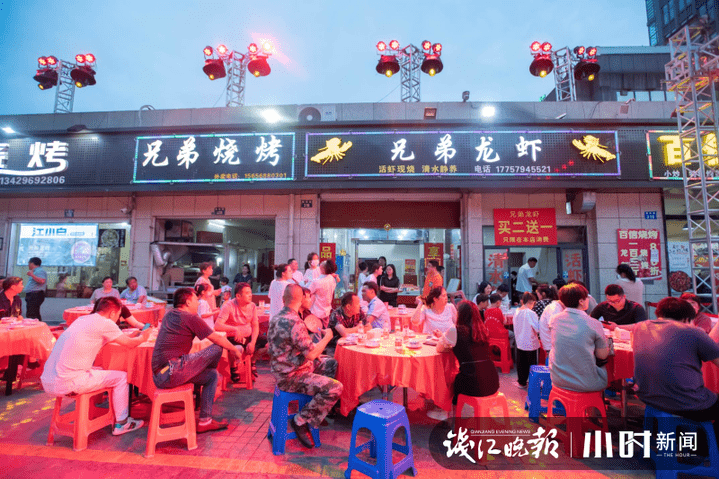 In 2018, Yangxi Street took Chaoyang Road as its axis to carry out comprehensive environmental improvement in small towns and was successfully evaluated as a model town in Hangzhou. In the creation of the beautiful town this year, Yangxi Street has activated the town’s industries with the brands of “crayfish brother" and "snail sister".

Chaoyang Road on the street, with numerous merchants, has always been Jiande's famous commercial block. The 150-meter road are crowded with 12 crayfish restaurants and attracts lots of people to come. However, in recent years, the development began to encounter bottlenecks, and merchants started to realize the disadvantages of the lack of solidarity cooperation and famous brands. This year, Yangxi Street took the lead in integrating various cooking practices of shops along the street, and jointly developed the "Yangxi ten wonders". The street also collected slogans for commercial districts, recruited social judges, establish of trade associations, apply for registered trademarks, issue consumer coupons, and cooperate with travel agencies. Relevant officials of Yangxi Street say that they are going to let Yangxi "food box" be a new business card for Jiande's characteristic commercial district, and let “shrimp brother” and “snail sister” walk out of Jiande and become popular in Zhejiang.