An exquisite B&B in Zhejiang is likely to get you addicted! Located at Miaoqian Village, Moganshan Town, Deqing County of Zhejiang Province, “Moshangyin” B&B is composed of two white houses at the hillside of the village, which are decorated with warm light, as elegant and fascinating as its hostess Chen Yin. “Han and I are natives of Deqing, and we grew up together in Mogan Mountain.” Chen used to be a programmer of an internet company in Hangzhou, while her husband Han Quan made a great success in advertising media in the same city.

Having a preference for travel, they have been to Tibet, Arctic Circle, Weizhou Island, Dubai etc. During the trip, they would choose a local B&B to have an in-depth experience of local customs. 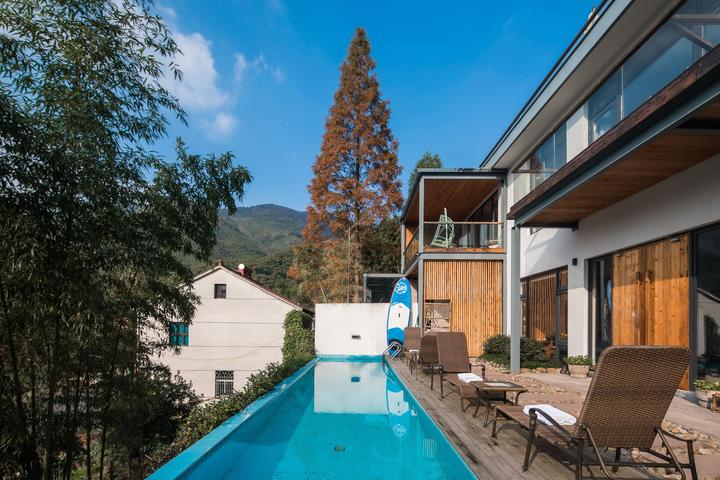 In 2014, attracted by the B&Bs at Mogan Mountain during a trip with friends, they decided to return to create one of their own.

Two abandoned old houses were renovated by Chen Yin in two years into a multi-functional building including multimedia area, leisure area and handwork area. As the house covers an area of 11 mu, Chen divided it into 11 rooms with different experience, representing 11 lifestyles. Logs in warm color, especially the aged ones are utilized in floors, stairs, walls, tables and track lighting on the ceilings inside the house, and designs of the lightings are unique and original. All of them were made by Chen Yin. The “Moshangyin” B&B gained great popularity for the integration of characters of the hostess with objects there, including every brick and wood. For more than two years since its opening, the occupancy rate has remained higher than 50%.

Some guests said that they have been addicted to the house and were reluctant to leave. Influenced by Moshangyin, boutique B&Bs have flourished at Miaoqian Village, with an exploration of a new model of rural operation launched with local Village Committee.