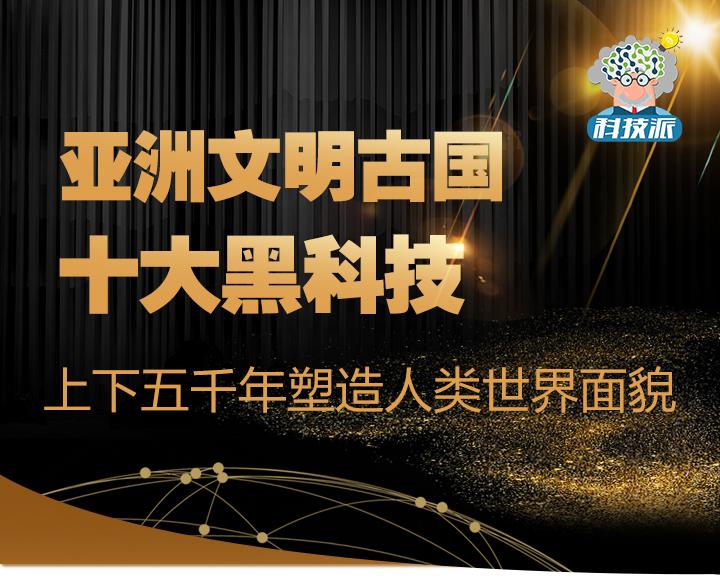 With more than 40 countries, 1,000 nations and 2,000 languages, and nearly 100 religions, Asia has nearly 1/3 of land and 2/3 of the population of the world, Many ancient civilizations born in the Yellow River and Chang Jiang, the Indus and Ganges River, the Euphrates and Tigris River, the Southeastern Asia and other regions, shine brilliantly in human civilization.

As is well-known, the modern world has been shaped by modern science and technology originating from Europe. Yet in the history of more than 5,000 years, ancient civilizations of Asia had made great scientific and technological achievements. Other than four great inventions of China, today we will introduce another ten technologies of ancient Asia. To a great extent, they have laid the foundation of human civilization.

Wheel is considered as the greatest invention of humankind after the method of making fire. The earliest civilization of humankind was established by the Sumerians in the south of Mesopotamia Plain in the Tigris and Euphrates River Valleys. More than 6,000 years ago, the Sumerians took the initiative to use a disc wheel in pottery making. With the aid of the rotation of a potter’s wheel, the potter can change the shape of pottery and produce pottery in batch.

About 5,200 years ago, the Sumerians put together some boards into a circle, fixed them together with studs and nailed them with an axle. This was the earliest edition of the wheel. In 3,000 BC, the axle was mounted to a cart, and the wheel was not connected directly with the cart.

Afterward, the Hittites transformed it into a spoke-type wheel, which increased the running speed of a carriage. 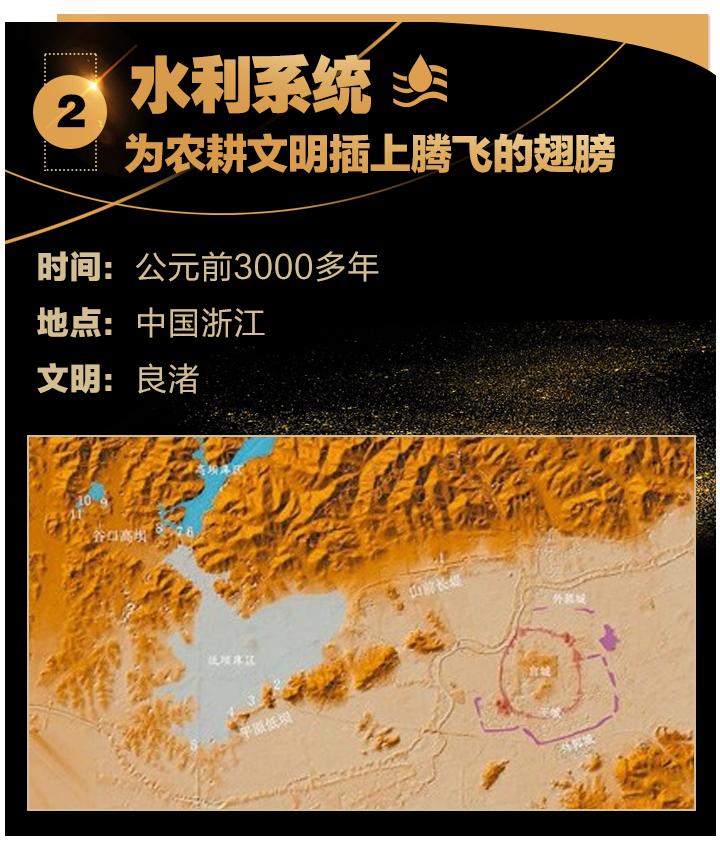 The legend of “Yu the Great tamed the flood” has been widely spread. In ancient China which was established on an agricultural foundation, the agricultural economy developed on good management of water resources, which stimulated progress in different fields such as handicrafts.

There is an ancient hydraulic system of eleven dams in the north and west of the peripheral of Liangzhu Ancient City in Zhejiang China, which has a history of more than 5,000 years and serves the functions such as flood and moisture control, shipping, irrigation, and tideland reclamation. It is the earliest and largest hydraulic system in the world as well as the earliest flood detention dam system discovered so far.

Before the flood detention dam was completed, every summer the heavy rainfall from Tianmu Mountains would inundate the crops and towns in the downstream plains. After dams of different heights were built between hills, it not only held back the summer floods but also stored water. The Hittites of West Asia invented metallurgy technology in the mid-20th century BC, began to use the iron plow and thus became the earliest nationality to enter the Iron Age.

In 15th Century BC, i.e., the early years of the Zhou Dynasty in China, the Hittites began to use silver currencies, which reflected their superb mining and metallurgical technologies and the developed commerce at that time.

The Hittites relied on iron weapons to capture the castle of Babylon and overturned the Kingdom of Babylon. The use of ironware was one of the reasons for the flourishing of the Assyrian Empire.

Historians of Western metallurgy today argue that the use of iron meteorite was centuries later than West Asia and its artificial ironmaking was also later than the West. But they have to admit that the pig iron, cast iron softening and steelmaking technologies of China were much earlier than the West. 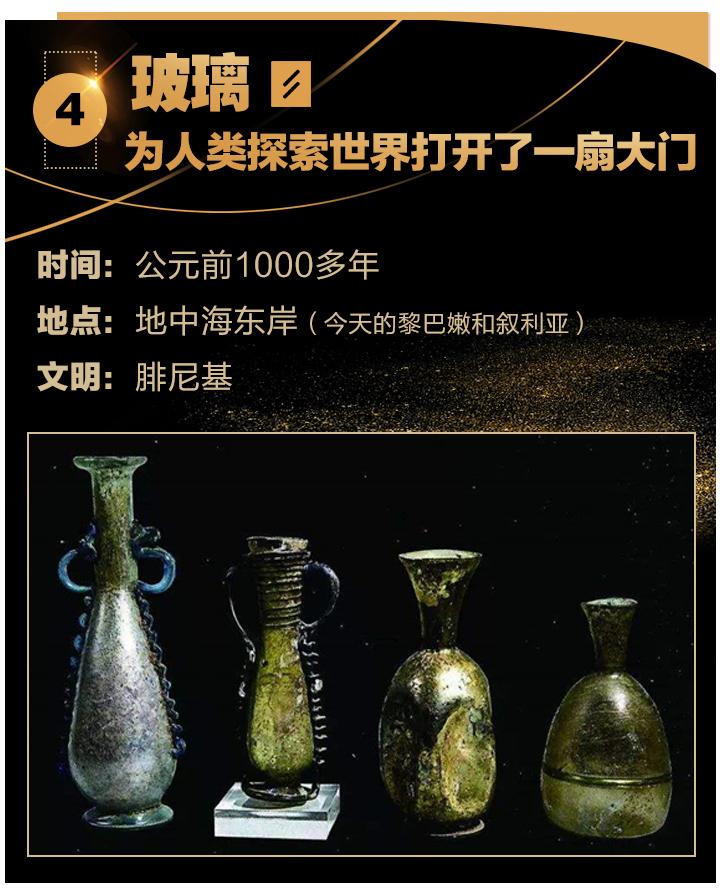 More than 3,000 years ago, a large merchant ship loaded with “natural soda” of the Phoenicians passed the coast of Syria. The crews put up a pot and prepared a meal on the seashore. They could not find any stones in the beaches, so they used natural soda as stones to put up a pot. But after the meal, they found that the natural soda became crystal clear. It turned out that under the action of flames, natural soda and the quartz sands of the beach had undergone a chemical reaction to generate the translucent substance. Glass was actually invented in such a surprising way.

Around the 4th century AD, the ancient Romans began to apply glass in doors and windows. In the 12th century AD, glass emerged as commodities and began to be used as an industrial material.

The invention of glass also resulted in the birth of telescope and microscope, which significantly broadened the horizon of the humankind in exploring the world.

Chromium is a kind of bluish silver-white metal. The metal chromium is easily passivated when exposed to air. An extremely thin passive film will be formed at its surface. The ancient sword of Empire Goujian unearthed in 1965 is a bronze ware of Yue State in the late Spring and Autumn Period. The body of the sword was coated with a layer of chromium-containing metal and remained sharp and stainless for thousands of years. And the swords produced in the Qin Dynasty hundreds of years later were not inferior in any respect. The bronze swords unearthed from the pits of Terra-cotta Figures of the Qin Dynasty were also stainless.

By coating a sword with chromium, the life of the sword was significantly prolonged and its effectiveness in the attack was also improved. Standardized production of weapons was realized in the Qin Dynasty and different components could be exchanged. That’s why the army of Qin was the strongest army in the feudal society of China.

Modern chrome coating technology was invented in the 1930s. According to material archaeology, stirrup appeared in China during the period of the Western Han Dynasty at the latest, which was revealed by the murals of the Western Han Dynasty. In 1977, a grave of the mid-Northern Wei Dynasty was unearthed in Hohhot. A pair of stirrups was painted at the belly of the pottery horses, which indicates that mature iron stirrups appeared in China at least around 400 AD.

During the times when there was no stirrup, a horse rider could only clamp his legs on the horse and it was quite exhausting to keep balance. After the stirrup was invented, the rider and the horse were connected as a whole, which made it much easier to control a battle seed and more energy-saving to ride a horse without using hands. In addition to flexibility, fighting power was strengthened greatly. As a result, cavalrymen became much more superior to infantry. Nomadic peoples such as Tujue, Qidan, Nuzhen and Mongolia became strong and rose sharply with the opportunity, which caused a great impact to the agricultural civilization and deeply influenced the history of Asia and the world. The Iron Pillar of Delhi is an iron pillar with a height of about 7.25 meters, a diameter of about half a meter and a weight of 6.5 tons erected within the Kutubu high wall of New Delhi, the capital of India.

You can find many inscriptions on the pillar, of which the most ancient should be the Sanskrit poem of three stanzas in six lines. Since Chandra (the Moon Goddess in the Indian culture) is mentioned in the third stanza of the poem, it can be inferred that the pillar has a history of at least 1,600 years.

Exposed to wind and rain for thousands of years, the iron pillar has remained stainless. It’s a pity that the forging technique has not been passed down. There are traces of iron pillar of Delhi across the world, which indicates that it used to be promoted worldwide in the ancient time.

Damascus steel is a compound with a high concentration of carbon developed in the Middle Ages. At the surface of knives and swords produced with it, a special pattern would be formed, which is called Mohammed pattern. The steel is sufficiently flexible and tough and is considered as the best steel in the world.

During the Qingli reigning period of the Northern Song Dynasty (1041-1048), a minority of Sichuan invented deep well of minor diameter. 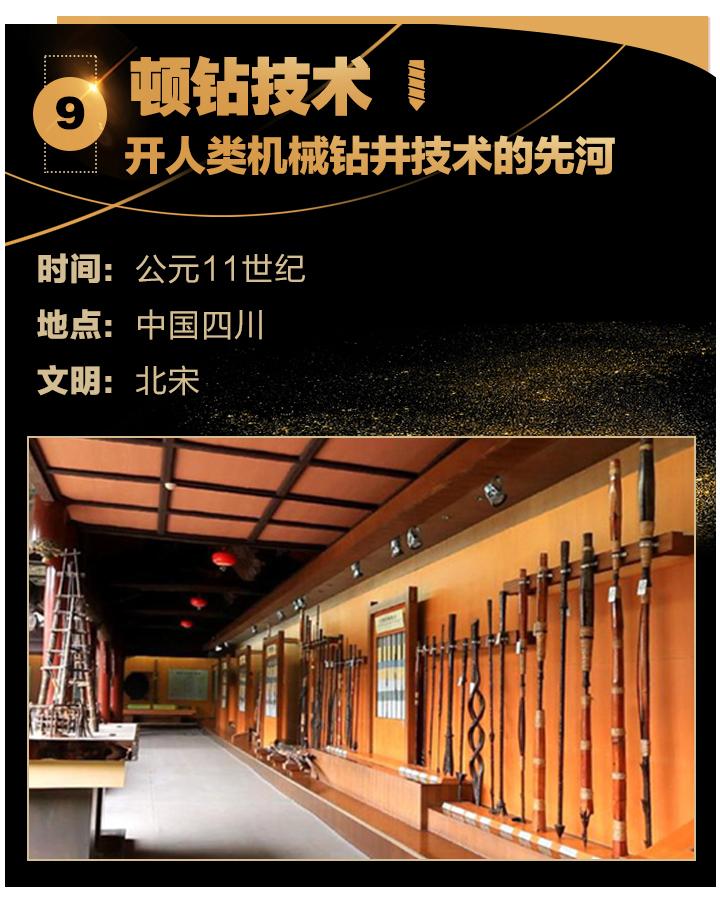 It is recorded that the construction of a deep well of minor diameter was just like the process of rice thrashing in ancient times. The difference is that below its conical head is hung a special round file, which contains a straight blade. Under the action of manpower, the round file will be lifted to a height. Under the force of gravity, it will hit the soil and rocks of the ground again and again. The angle will be changed after every impact so that the blade can shatter the rocks at the bottom of the well. This kind of drilling method is called “percussive drilling”.

The “percussive drilling” has blazed a trail for the mechanical drilling technology of the humankind, which consists of steps such as digging a well, measuring, straightening, filling cavities, and repairing the timber pile. It is widely applied in the production of well salt. The ancient city of Angkor is the symbol of Cambodia and a pearl in the cultural treasure of humankind, which is referred to as “four wonders of the East” together with the Pyramid of Egypt, the Great Wall of China and the Borobudur of Indonesia.

Angkor Wat was built during the period of Suryavarman II (1,113-1,150 AD). It is the largest temple and the earliest Khmer architecture in the world. The whole architecture weighs more than 3 million tons and takes thirty years to build with 300,000 skillful workers and craftsmen and 6,000 elephants.

All structures are built with sands and gravels. No mortar or any other adhesive was used between stones. The stones are piled up according to their shapes and weights.